skip to main | skip to sidebar

Multi Head Spindles typically comprise two generic types as either i) small taper mounted mini gearbox driven units designed to be used with a conventional single spindle CNC machine. Typically useful for auxiliary operations or where the user requires maximum flexibility or used as a single spindle speed increaser or ii) a larger dedicated multi stage precision gearbox driven from a single input shaft through a secondary gearbox before splitting into multiple pitched individual spindles comprise sometimes in groups of spindles in excess of 24 pieces driven at relatively low speeds  less than 1500rpm in parallel. In most cases this type of work is used for high volume production of automotive components with engine head and block being the most common for drilling and tapping of aluminium or cast iron components. The technology has fallen slightly out of favour in recent decades due to the advent of high speed single or twin spindle CNC machines with tool changing capability as a standard machine. This type of next generation standardisation allows automotive customers to have mixed model production and flexibility on the introduction of new component modifications or variants but it does require a higher floor space and possible initial investment in the first phase. 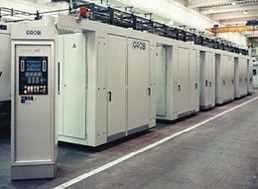 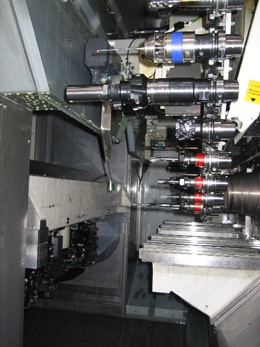 Recent investments of modern CNC machinery in automotive manufacturing plants have typically been of the newer type not utilising dedicated multi head spindles but a substantial installed base remains amongst older plants in OEM's as well in the 1st and 2nd tier supply chain. Kuroda Jena Tec possesses unique design and multi head spindle capability  (From it's Systematic both in terms of design, manufacturing as well as repair of existing older designs of multi head. This includes the ability to reverse engineer critical spare parts that may no longer be available commercially from the original supplier. This becomes extremely important where multi head spindle gearboxes and sub spindles utilise special gear pitches, seals and bronze bushes which are normally of a non-standard type. Kuroda Jena Tec can therefore provide and stock spare parts packages also to support planned or reactive repair work. 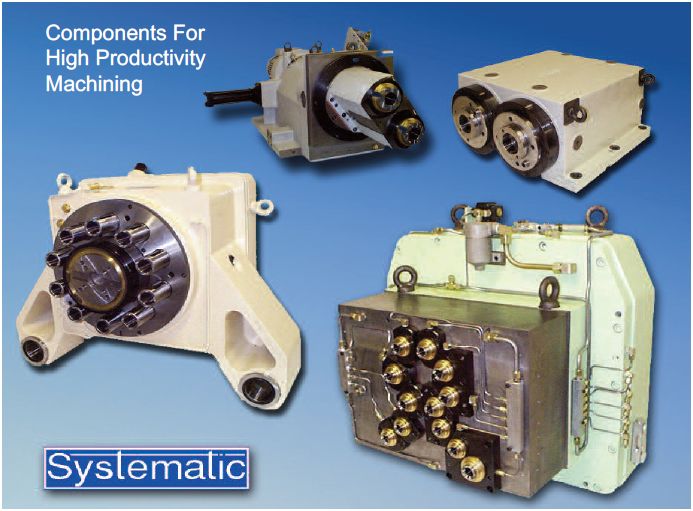 As always in the repair business, capability and speed of response is critical and Kuroda Jena Tec prides itself on the ability to provide its customers with a high standard of reactive service particularly in the automotive sector. Where engineering projects are required perhaps for the planned upgrade to a new component modification, Kuroda Jena Tec also possess the design and manufacturing competence to analyse the engineering component with the customer to design a new spindle head where required, manufacture, assemble, test and assist customer with the on-site integration and machining trials. 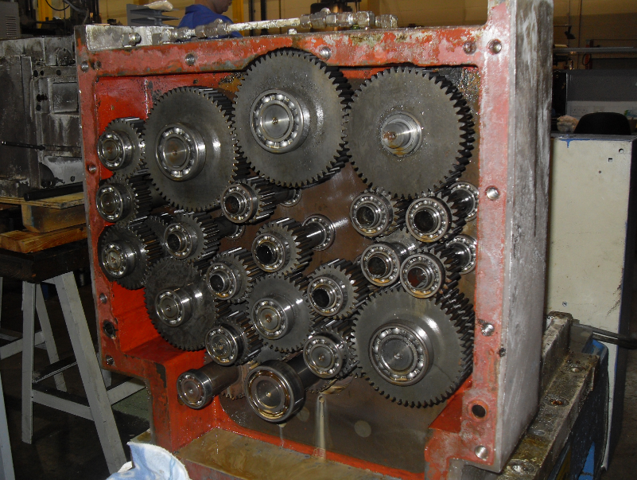 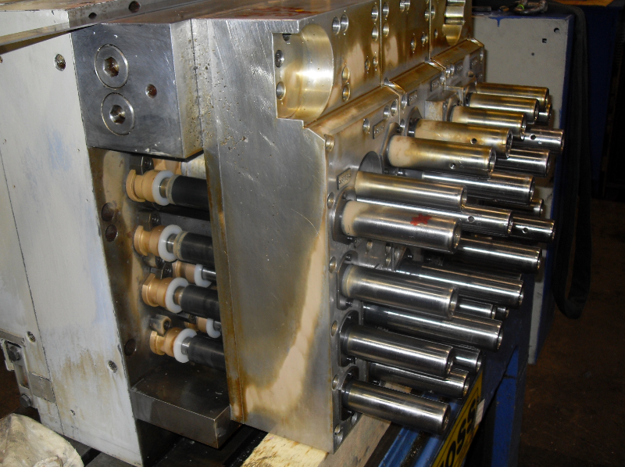 Linear actuators come in many shapes and sizes from low cost units for inaccurate actuation  with an integrated low cost stepper motor through to long length belt drive units for component handling to high force cylinder type actuation for forming and pressing processes. In many cases, customers are unaware of the ability to repair these units which can be achieved cost-effectively via a specialist asset repair organisation such as Kuroda Jena Tec. Using state of the art test rigs and motor/drive configurations, Kuroda Jena Tec can strip most makes and types of actuator to repair, replace and re-assemble back to OEM standards at a fraction of the cost compared to buying new Where damage sustained is excessive meaning repair is not cost effective, Kuroda Jena Tec have a range of carriage and cylinder type ballscrew actuators which may be suitable as a replacement upgrade. For more information, go to www.jena-tec.co.uk or call +44 (0)1623 726010 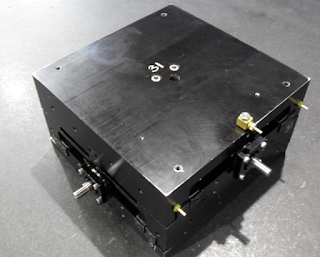 Avoiding the need for expensive investment in new grinding machines or excessive costs in subcontract can be realised through the addition of a modular grinding head for use with Vertical Turning Lathe's (VTL's). Kuroda Jena Tec have a specific range of WBSVH units designed for horizontal or vertical applications which with the addition of an inverter system can be easily retrofitted to an existing manual machine tool. Used in a variety of applications ranging from grinding of stellite hard facing or machining honeycomb rings in aerospace blade casings, the addition of a modular unit is a highly cost effective way to add capability to equipment already located in the customers factory. Kuroda Jena Tec also produce units in its TPG series for use with horizontal lathes for both internal and external grinding. Custom designed inverter packages can be supplied as a complete modular retrofit. 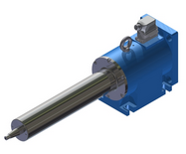 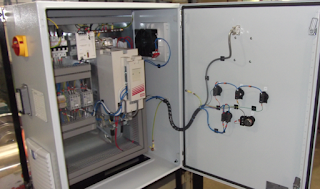 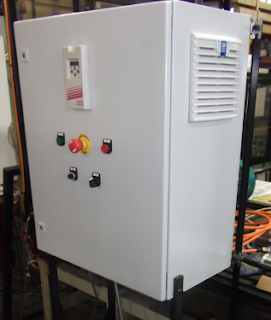 Kuroda Jena Tec, an established manufacturer of motorised machining spindles for grinding, milling and turning has seen active growth in new orders for contract research in the field of ultrasonically assisted machining. Since 2011, Kuroda Jena Tec has developed ultrasonically assisted grinding spindle prototypes for heavy duty grinding of hard materials through the development of a modular grinding unit providing 20kHz frequency oscillation axially between 6-12 microns. This exciting process capability provides some clear benefits in terms of material processing speeds, tool wear and mechanical material properties. Designed in-house to provide different characteristics according to the application, Kuroda Jena Tec have subsequently designed and supplied a light weight drilling spindle with up to 40kHz oscillation for composite materials to a leading UK research organisation. Further development and application work is planned in this exciting area with research organisations and other leading machine tool OEM's. 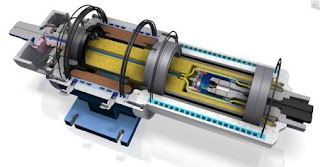 In a similar vein to design of new automation equipment, Kuroda Jena Tec is a one stop shop for automation and machinery components and has utilised this capability for the modernisation of production machinery both internally as well as for external customers. The example shown below is an Okamoto surface grinding machine that underwent a complete mechanical refurbishment of spindle, bedway as well as replaceable components and hydraulics system. The refurbishment was conducted within Kuroda Jena Tec's UK facility and overhauled within a 4 week period before being returning to the customer production facility. 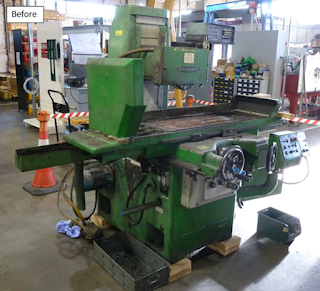 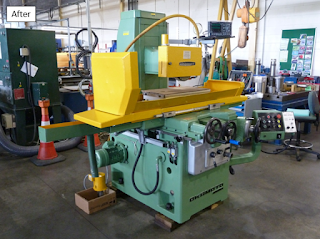 Similarly a leading machine tool producer's service department had a modular grinding attachment used to grind spindle tapers in-situ and Kuroda Jena Tec was pleased to refurbish this unit and renovate it back to original specifications. The attachment was stripped and serviced with a change of bearings, re-grinding of the tool interface and refurbishment of all other serviceable parts. 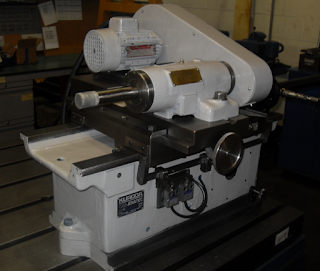 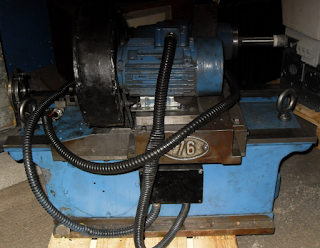 At the other end of the scale in terms of complexity and contract value, Kuroda Jena Tec's transfer machine know-how came into play when performing a major $1m retrofit and turn key upgrade to a 3 station Marwin rotary transfer line for a 1st tier automotive supplier which comprised of multiple new machining spindle heads and gearboxes, hydraulic slides, guarding, fixturing and new PLC programming for additional machining operations to be utilised on a new part variant. The 6 month contract entailed design and manufacture of modules followed by a site installation over a 3 week shut down period before successfully returning the machining line into production. 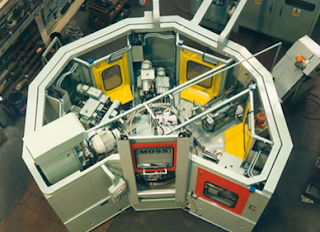 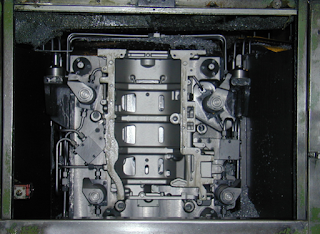 Kuroda Jena Tec's capability in linear motion components and asset repair is well known but additional automation capability is becoming an increasing demand of Kuroda Jena Tec's UK facility as requests from customers for more value added services increases. A recent example is the design, manufacture, assembly and test of a special purpose automated test rig for an automotive customer for engine components to determine whether sand from the casting process was contaminated in the component prior to subsequent machining operations. Kuroda Jena Tec worked with the customer to originate a specification of testing station able to automatically process aluminium engine parts at a high throughput rate and use air flow to determine go or no-go process limits. Where parts had insufficient airflow, they were automatically ejected from the production line for further inspection and rectification. Kuroda Jena Tec undertook the complete turnkey system design through to implementation in the customers' production line. 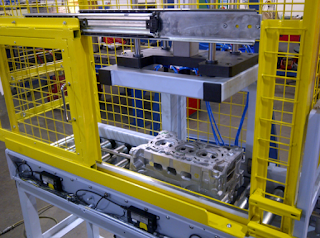 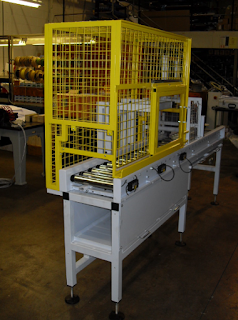 Pre-Loading of Ballscrews One of the distinctive features of a ball screw is the ability to have increase rigidity by preloading. In order to increase the rigidity of a ball screw, "preloading" must be applied to reduce an axial clearance between a ball nut and the screw shaft. Precise positioning can be achieved by the application of preloading. However, it is of great importance to apply only the proper amount of preloading in order to prevent excessive heat-generation and premature termination of ball screw's expected life. There are various methods of ball screw preloading as shown in the following. Kuroda uses: Oversized Ball Preload for light to medium loading applications, and Double Nut (Pin Method) for medium and higher loading applications. 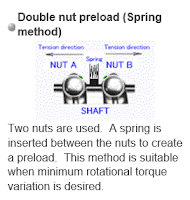 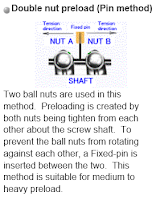 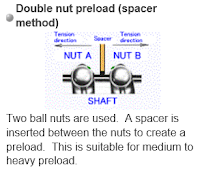 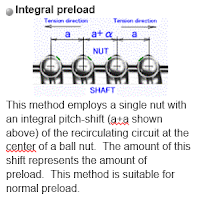 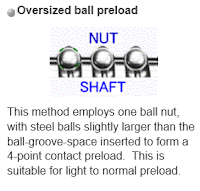 Therefore, it is important to properly size the ball screw based on its life calculations. The following is the typically accepted guideline. Machine Tool 20000 hrs. Industrial Automation 10000 hrs. Equipment Automation Control 15000 hrs. Measuring instruments 15000 hrs. The following Surface-Flaking progression of ball screws beyond its life expectancy has been observed as the result of Fatigue Life Tests. Some round "pitting" 0.2mm in diameter appear on the surface of the ball nut groove initially, followed by appearance and propagation of "cracks", and finally resulting in "flaking" of the entire surface of the ball screw shaft. What is backlash? The term "Backlash" originated from gear engineering discipline. In JIS terminology, this word is described as: Play that exists between a pair of engaged gears' tooth surfaces. When described as a distance of an arc on the engagement pitch circle, it is called "Circumference Direction Backlash", when described as the shortest distance between two opposing tooth surfaces is called "Normal Line Backlash".

Generally, some play is required in machinery systems. Gears will not function if all back is eliminated. It is inevitable to have small back-play in any gear train in operation. Same can be said for Triangular and Trapezoidal Screw systems, and it would be difficult to hand-rotate without some "play". However, it is possible to eliminate this backlash in ball screw systems, making possible to ensure accurate positioning in reversing applications. Causes for ball screw backlash are: 1) Axial clearance 2) Axial elastic deformation of nut 3) Elongation and contraction of screw shaft 4) Axial deformation due to tortional forces The entire drive train mechanism must be taken in consideration when considering the subject of Backlash. There is a method of backlash reduction caused by axial clearance and deformation of the contacting surfaces. It is called "Preloading" and is applied during ball screw assembly. This "Preload" is not to be confused with applied load on the system, but should be understood as internally built-in load. What is critical speed? An elongated cylindrical object such as a ball screw shaft will always have a certain amount of sag at the middle due to its own mass (weight). If such cylindrical object (a screw shaft) is held by rotary bearings at its ends and rotated, the sag would increase as the rotational speed is increased and may eventually reach a speed point that is destructive to the shaft. This potentially destructive rotational speed is called the "Critical Speed". It is also referred to as "Whirling Speed" or "Whipping Speed". The Critical Speed parameter should be paid a high degree of attention when designing ball screw driven systems. The Critical Speed can be obtained by calculating, or from "Allowable Speeds" nomogram provided in our catalog. It can be observed from the nomogram that smaller the diameter and longer it is, the shaft will become critical at lower speeds (Critical Speed is low). In addition, any imbalances in other rotating elements within the system will contribute in abnormal vibrations. Careful design considerations ensuringto eliminate any axial concentricity errors in the support bearings, and to avoid any bending forces on the screw shaft. Since the nuts travel in ball screws acting as moving supports, and the operation of ball screws involve reversing at their stroke ends, it is generally understood that the oscillation amplitudes of ball screws are smaller than that of common drive shafts.
Posted by Kuroda Jena Tec Ballscrews, Spindles & Linear Motion Technology at 4:00 AM